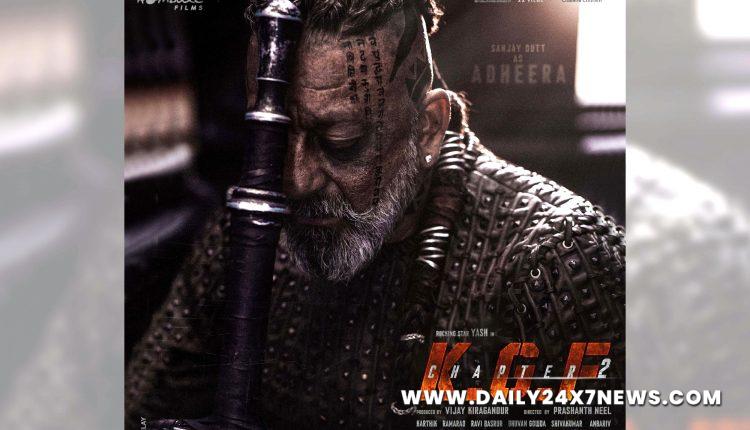 Mumbai : The first look of actor Sanjay Dutt as Adheera in the upcoming KGF Chapter 2 was unveiled on Wednesday, when the actor turned 61. Dutt says he could not have asked for a better birthday gift.Sporting braided hair with tattoo on his face, Sanjay as Adheera looks evil, in the new image shared on Twitter.”It’s been a pleasure working on this film and I couldn’t have asked for a better birthday gift. Thank you @prashanthneel, @karthik_krg, @thenameisyash, @vkiragandur, #Deepak, #Lithika, #Pradeep & the entire team of KGF. Special thanks to all my fans who have always showered me with their love and support!#KGFChapter2 #AdheeraFirstLook,” Sanjay captioned the image.Producer Ritesh Sidhwani also shared the look of Adheera on Twitter and wrote: “Adheera — Inspired by the brutal ways of the vikings.”The first chapter of the film had ended with Kannada superstar Yash’s Rocky killing his rival Garuda, who controlled the gold mines of Kolar by the means of slavery and savagery. With a turn of events, Adheera had promised that he won’t try to take over the gold mines as long as Garuda was alive. In the second part of “KGF”, the audience will see Adheera and Rocky engaging in a power struggle over the gold mines.Directed by Prashant Neel, the film will be released in Tamil, Telugu, Malayalam and Hindi, apart from the original Kannada version.

Transactions from Sushant’s account to be probed, many to be grilled

Sushant Singh Rajput was a director with Rhea Chakraborty, brother in two companies

Urvashi Rautela to be showstopper at Arab Fashion Week