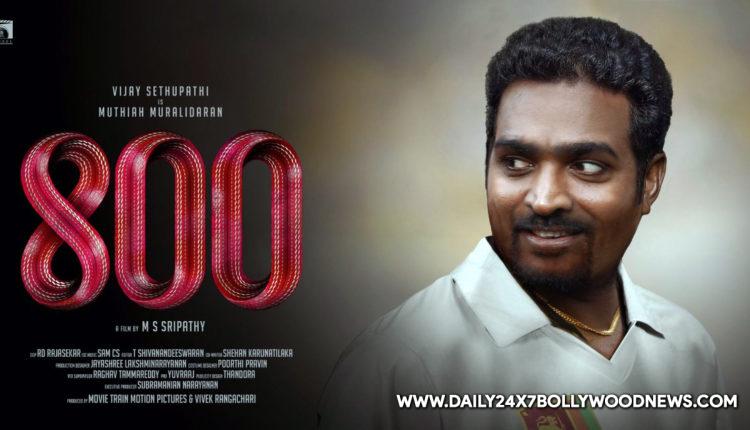 New Delhi : Tamil star Vijay Sethupati is facing wrath on social media ever since the motion poster of his upcoming movie ‘800’ was launched.The film is a biopic of Muttiah Muralitharan and Sethupati essays the central role of the legendary Sri Lanka spinner. Fans are upset that the actor took up the role of the Tamil-origin cricketer who never spoke out against the alleged atrocities that the Sri Lankan government is said to have inflicted on the country’s Tamil population in the past. Netizens used the hashtag #ShameOnVijaySethupati to convey their anger and disappointment.”Always admired Vijay Sethupathi as an actor. But now he shattered respect I had on him now by making this traitor’s life history who openly supported modern day dictator Rajapaksa. Murali himself said 2009 was his happiest year of his life #ShameOnVijaySethupati (sic),” wrote one user on Twitter.”The Sinhala government has massacred two lakh Tamils in Eelam. There is no other proof than this that #VijaySethupathi cannot feel this pain! #ShameOnVijaySethupathi #Tamils_Boycott_VijaySeth”pathi,” wrote another user.”I strongly condemn #VijaySethupathi for accepting this movie,” tweeted another user.”Can a biopic of #Afridi can be made in India and get support from Indians? #ShameOnVijay”ethupathi,” shared another.”#ShameOnVijaySethupathi…Murali is a Tamilian but he represents Sri Lanka & Sri Lankans. We have lot of cricketing legends in our country then why making Sri Lankan player biopic (sic),” reacted a user.’800′ is touted to be a moving portrayal of Muralitharan — one of cricket’s most brilliant and divisive characters. The film will be shot in Sri Lanka, UK, Australia and India. The shoot is slated to start at the beginning of 2021 and is set to release at the end of next year.The film will be made primarily in Tamil language. However, owing to Muralitharan and Sethupathi’s popularity, the film will also be dubbed in all South Indian languages as well as Hindi, Bengali and Sinhalese. An international version with English subtitles is also being planned.Muralitharan is the only cricketer to have taken 800 wickets in Test cricket. Besides, he also picked up 534 and 13 wickets respectively in 350 ODIs and 12 T20Is.

Divyanka Tripathi recalls when she chose…

Shah Rukh Khan asks if he is…